Just as our lives were beginning to settle down, with Brian recovering from his heart surgery and its subsequent complications, our household was hit by another health crisis. A few days ago Clare, my 91-year old mother who lives next door, developed acute abdominal symptoms. For the third time in recent weeks I called the emergency ambulance, and for the third time spent most of the night helplessly keeping watch by the hospital bedside of a desperately ill relative. The surgeons were doubtful whether Clare could withstand the operation which would be necessary to save her life. I pressed them to try, for the alternative would be an agonising and undignified death, but they were reluctant to attempt such a major procedure in the middle of the night. Meanwhile repeated large doses of morphine and other drugs were failing to control Clare’s pain, nausea and distress, though eventually the anaesthetists performed an epidural which brought her some relief.

There was better news next morning. The surgeons did decide to operate, and Clare survived the removal of large sections of necrotic bowel. So far – though it is very early days – she is making good progress in hospital.

It seems incredible that our lives, so contented and well-ordered for the last few years, have been suddenly disturbed by this sequence of traumas. Sayings such as “troubles never come singly” “it never rains but it pours” and “bad things come in threes” suggest that negative events do have a tendency to cluster in time. I noticed this when I carried out my own research study to investigate “Life events and breast cancer prognosis” which involved repeated interviews with over 200 women over a three year followup. While some of these women reported very few happenings during the study period, there were others who experienced a whole series of disasters. Sometimes it was possible to identify a chain of events leading on from one another. Sometimes all the events seemed to stem from one single cause, which in some cases appeared to involve the personality and behaviour of the person concerned. Few of the events could be considered totally independent from those who experienced them.

Were the recent misfortunes of our own family linked, part of a cascade of events beginning with Brian’s heart attack? I have always tended to be sceptical of the theory that most illness is due to “stress” (the results of my own study, cited above, gave no support to the popular notion that stressful life events promote the growth of breast cancer). But there is no doubt that psychological stress can lead directly to imbalances of the body’s neurological, endocrine and immune systems, as well as to impaired self care due to missed meals and lack of sleep. I have no doubt that anxiety, overwork and exhaustion since Brian became ill have contributed to my own recent health problems of high blood pressure, sinus tachycardia, a posterior vitreous detachment of the eye, and delayed healing of biopsy wounds.

“Stress” is not the only possible explanation for the clustering of events, and maybe there are also metaphysical causes. According to the Law of Attraction, negative thoughts and feelings in response to adversity are likely to result in more of the same. And an astrologer friend, who like me was born under the sign of Aquarius, has cited “the ghastly Saturn square Pluto events which have befallen Aquarians of late”. I am trying to “take one day at a time” and appreciate good things like the spring roses blooming in our garden. 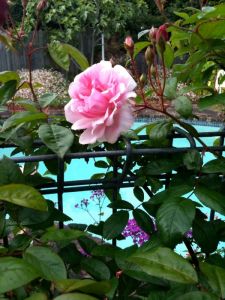