Watching the movie version of Cats prompted me to look out the few pieces of doggerel (catterel?)  that I’ve written to various feline companions over the years – not up to TS Eliot’s standard, but cat-lovers may enjoy them.

This is dedicated to Orange Roughey (O.R.) who was rescued as an aggressive stray living wild on the mountain behind our house, and after a long and tumultuous period of rehabilitation turned into a cuddly domestic pet.

This is a sentimental poem written after Felix, a much loved black and white cat, died from an undiagnosed illness.

Magic, also black and white, was abandoned under a hedge as a young kitten and came to us in a fragile state. A triolet is a short poem of eight lines, containing two rhymes repeated in specific places.

Daisy is no longer with us, but Magic and Leo are alive and well. The three-line haiku format originated in Japan. 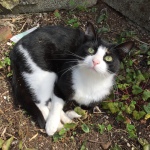 I think my novels are better than my poetry and the latest one You Yet Shall Die (available from Amazon.com, Amazon.co.uk, Smashwords.com and other online retailers), a story of family secrets and a long-ago crime, features several cats. Foxglove: one of the poisonous plants featured in Agatha Christie’s novels. Photo by Clint McKoy on Unsplash

Crime and mystery novels rank among the most popular of fiction genres today. The many subdivisions – for example the traditional, police procedural, psychological thriller, cosy mystery, historical crime – almost always have murder as central to the plot. Why do so many people, most of them of them pleasant and law-abiding in real life, enjoy writing or reading about this gruesome topic? Whereas cruelty towards animals in books and films is widely considered unacceptable, and rightly so, cruelty towards humans is seen as fair fodder for entertainment.

An obvious reason, though perhaps not the most important one, for the appeal of crime fiction is the intellectual challenge of solving a puzzle. This is clearly so for the old-style “whodunnit” which often involves the discovery of a dead body in a closed setting, such as a country house hotel, where each of the people present is found to have a motive for murdering the victim. One or more other deaths may follow. A detective, amateur or professional, eventually nails the culprit – usually the most unlikely suspect – with the aid of clues which have been scattered through the text, along with a few “red herrings”. The solution must not be too obvious but, in theory, a clever reader should have been able to work it out. The story will have a neat resolution, with the truth being revealed and justice restored.

Variations on this basic formula are still used by some modern crime writers but the trend is for longer books with more subtly and complexity . In psychological thrillers, the interest lies not so much in solving a mystery as in exploring the criminal’s character and motivation. Sometimes the murderer’s identity is obvious from the start, though there will usually be a surprise twist at the end.

Crime fiction appeals on the emotional level well as the intellectual one. Perhaps it offers an acceptable channel for expressing feelings that in civilised society are usually suppressed – for example jealousy, greed, hatred, desire for revenge, obsession with evil and death. PD James said that all the motives for murder are covered by four Ls: Love, Lust, Lucre and Loathing. Whereas in real life the majority of crimes are committed by men, it is notable that many writers and readers of crime fiction are female, including some highly respectable mature women. Maybe crime fiction offers them a “safe space” to express the shadow side of their personalities.

Is crime fiction just harmless entertainment, or does it influence readers’ attitudes towards murder, whether acting as a deterrent or even encouraging the occasional person to commit one themselves? Novels at the lighter end of the spectrum, by presenting a sanitised picture of unnatural death and treating its investigation like a game, tend to trivialise the topic. More serious ones, which provide graphic forensic detail and authentic descriptions of police and court procedures, might help anyone who is planning a crime to select a method and escape detection. Similar concerns apply to crime movies and TV shows, which reach a wider and less discriminating audience than most novels do. But leaving such concerns aside, I continue to enjoy reading, writing and watching stories about crime.

Jennifer Barraclough is a retired doctor, originally from England but now living in New Zealand, who writes medical and fiction books. Her latest novel  You Yet Shall Die, featuring another poisonous plant, is available from Amazon.com, Amazon.co.uk, Smashwords.com and other online retailers, or can be ordered from bookshops and libraries.