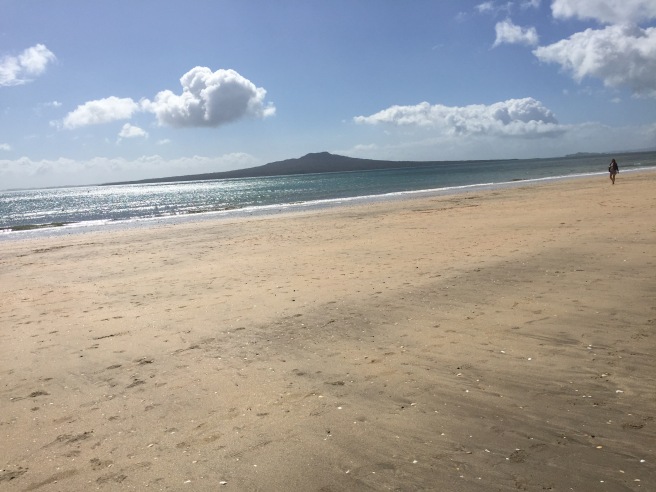 Today I walked the length of Takapuna Beach without my shoes on. The sun was out, the tide was low, the sand was smooth and firm. Being near to such beautiful beaches is one of the best things about living in Auckland.

Walking barefoot on grass or sand is a natural way of “earthing“. Apparently this practice causes a transfer of electrons into the body, thereby helping to neutralise free radicals and reduce inflammation, so bringing about improvements in physiology. Research is still in its early stages but there is some evidence that earthing can help with numerous conditions including pain, insomnia, hypertension, cardiac arrhythmias and autoimmune disease. Certainly I feel in better health when I walk on the beach regularly, and often get new ideas for writing while there.
For eight years I used to take this same walk once a week, rain or shine, accompanied by my mother and a dog called Khymer. Then Khymer and my mother both died, my husband and I were both ill, and I gave up doing it regularly. Now I am determined to resume the routine. Having Khymer with me only in spirit does have one advantage; I no longer have to start early in the morning to comply with local regulations about the times when dogs are allowed on the beach.
October 22, 2016January 31, 2017 ~ Jennifer Barraclough ~ 1 Comment

Every cat is unique in appearance, personality and behaviour. Our black and white Magic is addicted to raw chicken necks; Leo the tabby likes to relax in the letterbox; and tortoiseshell Daisy is interested in music. My attempts to practice the piano are often interrupted when she jumps up on the keys and plays a loud accompaniment. Here is a short video of Daisy’s latest composition.

Daisy may not be so skilled as the famous American piano cat called Nora but then, like me, she only started learning to play in later life.

P.S. A reminder that my short novel Blue Moon for Bombers is free from Smashwords until the end of November. To download a copy click here.

I recently updated my author interview on Smashwords and one of the questions What are you writing next? made me review my future aims.

I am currently working on a short memoir about the catastrophic series of medical events that affected my family in 2015. There were two reasons for starting this project. First, I hoped that writing about what happened would help me come to terms with it better; as I discussed in an earlier post there is evidence that writing about illness and trauma can be therapeutic. Second, other people who are faced with the challenges  of cardiac surgery, bereavement, and stress-related symptoms in themselves or their families might benefit from reading about what helped me to cope, or otherwise.

Writing this memoir is proving quite hard going. Perhaps I have reached the point of  wanting to move forward in life rather than keep dwelling on what happened. I am also wary of conveying the negative and self-pitying attitudes which can so easily mar this kind of book. I look forward to writing something lighter, though my only recent effort has consisted of some sentimental poetry about cats.

What I would ideally like to write next is a really substantial novel. I have already self-published six short ones, and I think that like the vast majority of the thousands of new books coming out every day they are good enough to provide readers with a few hours of entertainment, but will prove to be ephemeral.

Nobody knows which, if any, modern novels will become classics but it is my personal experience that only the occasional book creates a lasting impression. For example, one that I have just finished reading is A Dictionary of Mutual Understanding by Jackie Copleton, a drama set in wartime Japan. I am never going to write a book of comparable quality, and the ambition of producing my own “magnum opus” seems likely to remain unfulfilled in this lifetime, but I do hope to be inspired towards something new. Meanwhile Blue Moon for Bombers, the middle volume of my Three Novellas trilogy, is free from Smashwords till the end of this month. To download a copy click here.

Happier, healthier and several pounds heavier, I am back in Auckland after spending a sunny September in England. I’ve been lucky enough to be able to revisit my home country every year since we moved to New Zealand in 2000, and this year Brian came too. We were both anxious about travelling in view of our recent heart problems, so it was reassuring to discover that a consultant cardiologist was seated next to me on the outward flight. Neither of us needed his services and there were no medical emergencies during the rest of the holiday.

This visit was more than usually nostalgic, filled with reminders of my mother who died nine months ago. One sunny Sunday afternoon a group of cousins from her side of the family, the Guys, gathered for a picnic in the grounds of Gray’s Inn; our homes are so widely scattered around the UK and overseas that many of us had not met for decades. I had a friendly meeting with my first husband, having resumed email contact with him after my mother’s death. I walked on the sands at Margate in Kent, where my mother spent part of her childhood. And scattered a portion of her ashes beside her brother’s grave in the churchyard of the Yorkshire village where she lived in later life. Thanks to her wartime service in the British Army, I was able to stay at the Victory Services Club in central London, an ideal base for making daily trips around the country with my Britrail FlexiPass.

There have been other deaths among my UK contacts in the past year: two close friends have been widowed, another couple have lost a son, others are getting old and unwell, so some of my visits were tinged with sadness. But I still have many relatives and friends around the country, including some younger ones I did not know before, and though there was not enough time to see them all I did meet people from diverse places: Malvern, Frome, Gosport, Winchester, Kirk Hammerton, Oxford, Dorchester on Thames, Hythe, Manchester, Birkenhead, Shetland, Soberton Heath, Saffron Walden and various parts of London. Everyone was so kind and hospitable – thank you! Here I am in Sue’s allotment, with Sara’s dog, and with Brian in Oxford University Parks.

There were sightseeing visits too, to Charles Darwin’s home at Down House and the Sackville-West estate at Knole, both in Kent. My most adventurous solo trip was to Limerick, a first step in exploring my Irish ancestry on the paternal side, a topic I may write about in a future post. Limerick seemed a charmingly old-fashioned small city, so quiet and peaceful after London, and I had a lovely view of the River Shannon from my hotel room.

As always these visits make me question where my true home is, but at least for now it is in Auckland, and it is good to be back as England turns towards autumn and New Zealand to spring. Wearing clothes in different colours, after the all-blue wardrobe I packed for the trip. Thinking about writing another book. Being reunited with my cats. 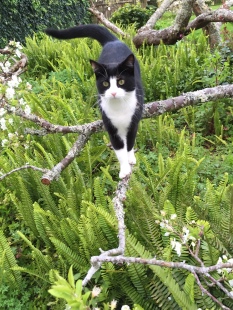 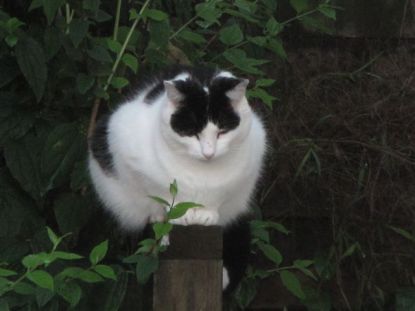 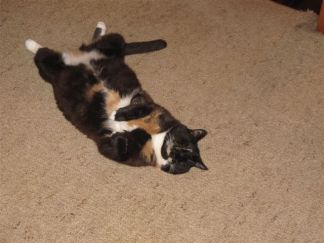