I had forgotten that today, 1st September, was the estimated date of birth of the two kittens I fostered last year. Here is a picture of them at about nine weeks old; the dark mackerel tabby is Marco (male), and Polo (female) is the tabby and white. 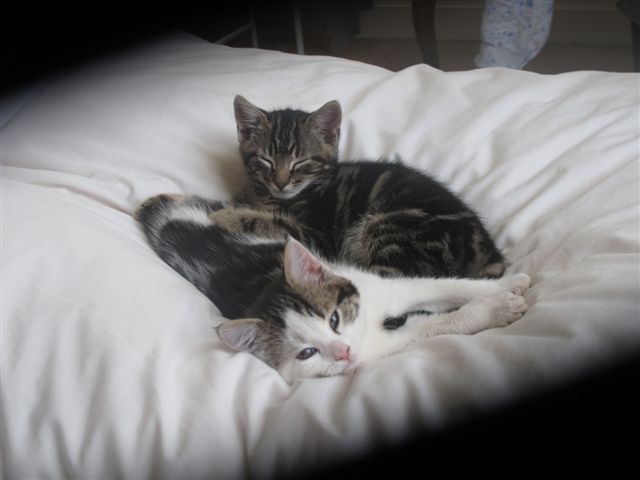 It was a lovely surprise this morning to receive birthday messages and photos from both their respective “forever homes”. I had been overwhelmed with applications to adopt them as soon as their details went up on the Lonely Miaow website, and it was up to me to select the most suitable ones – a big responsibility. Fortunately I chose well, for they quickly settled in with their new families and are greatly loved.

Fostering has both ups and downs. It was a lot of work looking after the two lively little kittens and they caused a fair amount of damage around the house. But we became very fond of them and could hardly bear to see them go. Fortunately I was able to keep in touch and visit them both now and then.

I still miss Felix, but the two young cats who have now taken his place in our home are a great delight. A few weeks after adopting Magic from the SPCA, I agreed to foster little Leo for the Lonely Miaow. As soon as the two kittens set eyes on each other they started playing-fighting, and bonded so closely together that I decided to adopt Leo myself.

They are both happy, healthy and friendly but otherwise quite different in appearance and temperament. Magic, the black and white female with gold spots, is now around nine months old. She is a small cat, quick and graceful in movement, full of energy, a keen hunter and seems totally without fear. Leo the male tabby, though probably three months younger, is already bigger and heavier than Magic. He is a placid, cuddly cat with a very loud purr.

I wonder how much their differences in personality are due to genetics, and how much to environment. Being rescue cats, I presume they both suffered some adversity in early kittenhood, but I don’t have detailed knowledge of their backgrounds.

It is impossible to “replace” an animal who has died, and for more than a month after losing Felix I felt no desire to get another cat. This was partly because there is other feline company in this house, for besides having our own dear Daisy, we receive frequent visits from two male cats who live nearby.  Another reason was that I dreaded the prospect of growing to love another and then, more likely than not, having to go through the agony of bereavement again in a few years’ time.

Then I began to feel differently. I started scanning websites about cats available for adoption, and felt very tempted when I found a young black and white male who not only looked just like my own Felix but also had the same name. However, many experts advise against seeking a carbon copy of the previous cat – there is a risk that the two animals will always be compared, usually to the newcomer’s disadvantage.

Many experts also advise against getting another cat “on the rebound” while still grieving for the one which was lost. However there are no rules and sometimes this is the best way of easing the pain, at the same time as giving an unwanted animal a new home. On a recent volunteer shift at the SPCA I met a woman whose cat had died only one week earlier. She had apparently been crying ever since, but after choosing a new kitten to adopt was transformed with joy.

Rather than permanently adopting another cat myself at this time, I have decided on a compromise. Last week I accepted an invitation to become a foster carer for a local cat charity, and am very much looking forward to picking up two kittens – not black and white, but tabby – from the vets tomorrow.