The adventures of the white-and-black cat described in my recent post Homer’s story still continue.

After my mother died Homer never gave up his attachment to her house, and although he did move in with us part-time, he started visiting the young couple who were renting next door to my mother. They became very fond of him, and when they bought a house of their own in Bayswater we agreed to a trial adoption.

We had Homer microchipped in case he went wandering again, although considering that six years had passed since he made his repeated journeys from Bayswater to Devonport, we hoped he would have outgrown his wanderlust.

I visited Homer and his new owners every week and we did everything we could to help him settle into his new home. All went well for a month, but on the first night after a cat door was fitted, he exited through it and turned up in Devonport – over 3 km away – next morning. After some tearful discussions we agreed that Homer had should be allowed to stay in the area he loves so much.

Fortunately, the new couple who are renting next door have also become fond of Homer, and are giving him food. He still likes to spend time around my mother’s vacant house, lying on the doormat as illustrated below. Last week he became obviously distressed when her furniture was being cleared out. But the new owners move in next week and I understand they are cat-lovers too, so I hope Homer will get on well with their two kittens, and that having meals available from three different houses won’t make him get too fat. 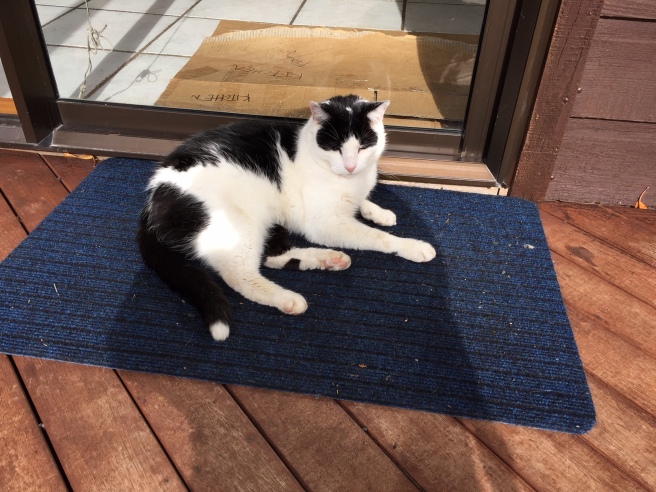 We have a fourth cat now, a companion for Magic, Leo and Daisy.

Some years ago a large white and black cat started making occasional visits to our garden, wailing like a lost soul. He was frightened and hungry, and after devouring any food I put out for him he would disappear over the fence and not come back for several days.

His distinctively marked tail, black with a white tip, helped neighbours and the local vet to identify him. Apparently he had been born and brought up in the street next to ours. When his owners moved to another suburb about 3 km away he did not settle, and made his own way back along busy roads to his original home.

I contacted his owners, who were pleased to take him back. They kept him indoors for three weeks. But as soon as he was released, he came back here. This scenario was repeated a number of times until I offered to adopt him and they agreed. I renamed him Homer.

Homer stayed at our house for a while, but still did not seem entirely happy. Then one day he followed us on a visit to my mother who lived nearby. He immediately curled up on her sofa and went to sleep. My mother did not particularly want a cat, but Homer refused to leave, and before long she became very fond of him.

So did Leo, a later adoptee, who loved going to visit Homer and seemed to regard him as a role model.

All was well until last year, when my mother went into hospital and eventually died there. Homer was distraught. He had to come back to our house for food, but was reluctant to stay, and could often be heard wailing outside at night. Three days before my mother’s funeral he went missing. After the service I went to check her house and found him lying semi-conscious on the doorstep with a swollen neck. I took him straight to the vet, and next day he underwent surgery for a large abscess.

Since recovering from that operation, Homer has at last become content to be part of our household. He gets on well with all the other three cats. He even jumps up on my lap to be cuddled now and then, and enjoys sleeping on flower pots.